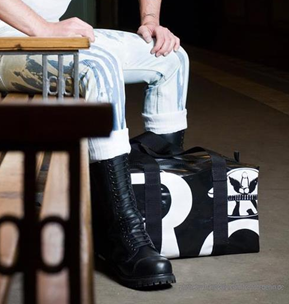 On the left is a pair of practically new ranger boots. On the right a not so new pair of Timberland classic. Which is hotter?

In pornography the shoes and boots are typically pretty new and certainly not dirty. This resembles a normative assumption that in performance everyone should look clean and that there should be a level of professionalism to such a production. I personally find the forced sterility of such films to be a turn off and much prefer a guy to be in a more natural pair of footwear. In pornography I find footwear that has obviously been broken in some, but that is absolutely pristine to be a bit of a turn off, like it is just there for show, it isn’t “real”, and thus has no authentic connection to the masculine identity of the wearer.

When sociology/gender studies and a hard-on mix, interesting things happen.