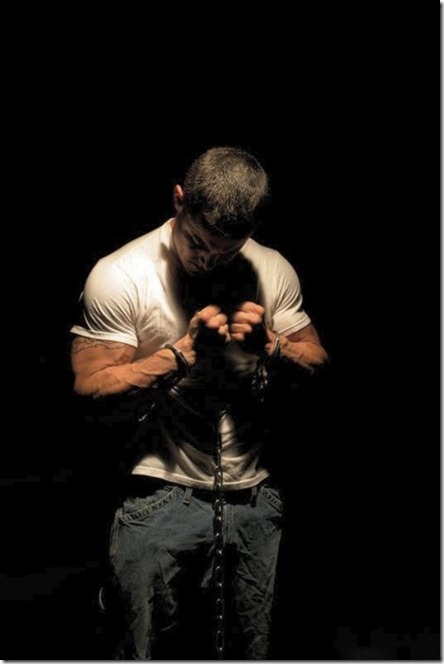 This photo has been lingering on my computer and various devices of mine for at least the past year. I am aroused every time I see it. It is a rather simple shot of a very developed guy with a hard-on who is in cuffs, straining against the chains with all of his strength. The chains do no relent, he is trapped. It is obviously a situation of helplessness for this guy, but yet his erection persists, obviously aroused by his confinement. The chain running down from the cuffs implies that his legs are also chained, the guy cannot run from his situation or his captor. The subtle lighting of the photo makes obvious the focus of the image, the boy’s bulging muscles and the chains that hold them. There is a secondary emphasis on the boy’s crotch, both highlighting his excitement and exposing his weakness. The rest of the image remains dark. The darkness around the boy makes him special, but the areas of the boy that are exposed to the light also allow the boy to be objectified. He is not just a guy to be viewed for his strength and celebrated for his finding pleasure in a challenging situation. In this image he is a boy that is an object. He exists not for his own pleasure, but for that of the viewer, and perhaps of his captor. His face is hidden, giving him no identity, but instead guiding our eyes to see him for his body. The boy is presented for erotic consumption, but he does so willingly.

I don’t remember where this photo originally came from, but I really wish I did. It excites and haunts me every time I see it.