Ever get a pair of shoes and then realize that you have quickly become attached to them, and not just because they are the newest? In December my friend Oscar gave me this new pair of Timberland boots. I showed them to him because I thought they looked really cool, and the picture Timberland showed of them had them sort of broken in and abused which attracted me to them even more. For a variety of reasons, after they arrived I did not want to touch the box, I was afraid to open them and look in. I had been accused of having too many pairs of shoes (by several people, but oh well, they make me happy). I was not sure what to expect about my own reaction when opening the box, since the color isn’t exactly in the traditional colors of boots that I usually wear, these boots are the color Chili. I do not believe I have ever had such a strong desire to lick a boot on my own foot before as I did when approaching these boots. These boots have not seen any closet time since arriving. I love the way these boots smell, taste and look.

I am torn between the new Timberlands and the Chippewa loggers that Jake gave me as to which is my absolute favorite, but I love both pairs a lot. The Timberlands are not as versatile for things like working in the garden, or anything dirty like that, but they are stylish, so I guess I should say the Timberlands are my favorite fashion boots. Boots in general turn me on, and I find that each has its own unique charm. 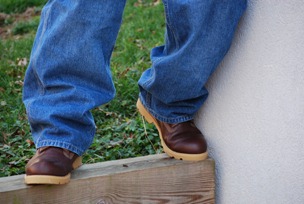 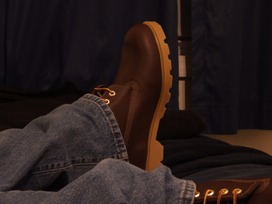